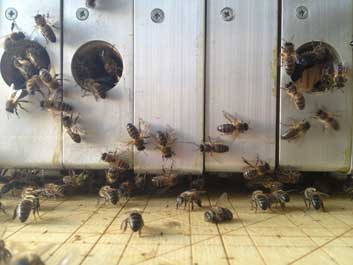 The Brussels Urban Bee Laboratory develops cradle to cradle monitoring beehives in order to experience the amazing world of bees and to sense the hidden structure and health of our urban environment through the activity of bees.

The transparent beehive is part of a series of ecological instrumented beehives building up towards a fully biocompatible intelligent beehive.
This beehive internally has the structure of a book. Bees build honeycomb structures on each page of the book. The hive is enhanced with microphones which pick up the vibrations and sounds of the hive which are sonified and made audible. Cameras inside the hive monitor the growth of the wax structures and the activity in the colony. Additional sensors measure temperature, humidity, and other microclimate measures. The hive is housing a live colony.

New media artist Annemarie Maes is the founding director of the Urban Bee Lab. She has for decades been a recognized leader pioneering art-science projects in Belgium, using highly original ways to bring out hidden structures in nature by constructing original technological methods to probe the living world and by translating that in artistic creations through sonification, visualization, sculptures, large-scale long-term installations, and workshops. She thus makes use of technological mediation to search for new forms of communication with the natural world.
In 2007 Annemie Maes co-founded the artist collective OKNO which has been active on the border between new media and ecology. OKNO uses DIY and collective artist practices to find new ways to engage with the urban environment. In 2009 she founded the Brussels Urban Bee Lab as a spin-off from OKNO. It focuses on urban bee colonies as a vehicle for novel artistic practices to raise ecological awareness .

Download here the CV of the okno Urban Bee Lab

Bee observation room. The room is heated up to a constant t° of 35°C. The walls are covered with aluminum foil, to distribute the light in an equal way.


mission statement of the lab

As artists and beekeepers we study since several years the tight interaction between city honeybees and urban ecosystems.
Our preoccupations with bees come partly from a fascination with these amazing insects: the way their bodies look and function, they way they organize their complex societies, and the way they explore their environment.

But we have also another motivation. In many industrialised nations, bee colonies are now threatened. There are many causes - amongst them pesticides and parasites - but the compromised state of the foraging areas for bees is just as worrisome. So we also work towards an improvement of the environment of bees with the creation of urban gardens and guerilla planting. Moreover, because bees reflect the health of their surrounding ecosystem and the cumulative effects of different pollutants, we use them as bio-indicators to make citizens aware of the increasingly negative effects of our life styles and methods of industrial production.

For many years we have been creating experimental set-ups -together with engineers and scientists- using sustainable beehives that have been augmented with sensors and sensory processing algorithms to analyse the state of the colony, the quality of pollen and propolis and the behavior of the bees. These ‘Intelligent Beehives’ are progressively linked in a European-wide network and the data is being made available online.
More specifically, we have set out several urban test fields in the Brussels' Canal Zone. This area features diverse activities: from community gardening and urban agriculture to accidental nature, interspersed between industrial buildings, office zones and living areas. Our test sites are connected by the flight routes and foraging activities of the bees. They create a green corridor in the city.

The Bee Laboratory & UrbanBeeResearch should be seen as an open framework. It is a long-term project on the edge of art, science and technology. The project is a collaboration between the artists, designers and engineers from okno.be, annemariemaes.net, the computer scientists ofthe VUB - artificial intelligence laboratory (Prof. Bart de Boer, Free University Brussels) and the Sony Computer Research Laboratory Paris - sustainability group (Ing.Dr. Peter Hanappe).

In the Table of Contents you get an overview from the main topics that are covered in this wiki - which is consired to be a notebook, a research tool. Links to open source databases where our video files and other data are stored, are Pandora VideoDatabase and connected OpenGreens.
The data from the sensors in- and outside the beehives can be consulted on the opensource platform opensensordata.net, and on the community platform p2pfoodlab.net.