ALGAE for a Sensorial Skin

At the core of this project is too research a biosensor to measure pollution in urban areas (the foraging fields around the beehive).
A take a naturalist approach to start this project: a naturalist is a type of biologist who studies the impacts of living species on each other and the environments in which they live. I study the different elements of the rooftop garden and how they relate to each other, to get a better insight in the dynamic network of this mini-ecosystem: the bees, the plants, the soil, the bacteria, the lichens, the a-biotic elements as minerals, air composition, gasses, temperature etc…
Naturalism is the study of the natural world as a whole and the study of each species within its environment, as well as how species interact with each other. Evolutionary science is at the core of the naturalists' work, which is very much about observations in the field next to work in the lab. Therefore I spent a lot of time in my rooftopgarden-openair-laboratory, taking field notes, photographs and written records and I am compiling them for analysis. 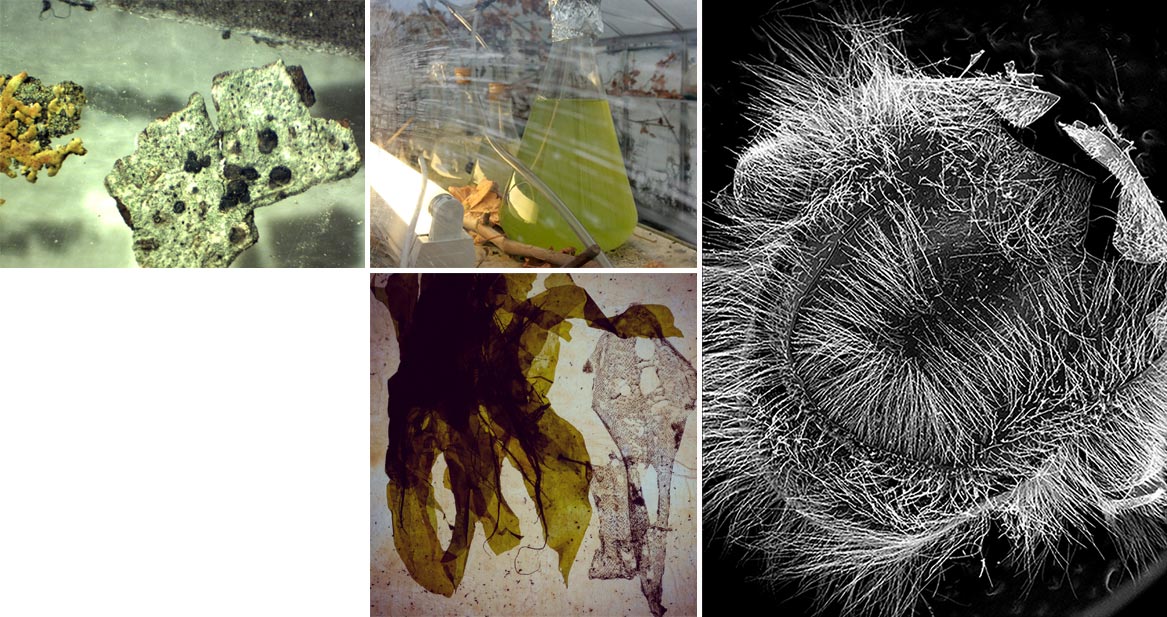 Air pollution is characterized by the presence of gas and particles in the outside air with harmful impact on human health and/or on the environment. Those pollutants come from natural phenomena (volcanic eruption, organic matter decomposition, forest fire) as well as human activity (industry, transport, farming and residential heating). This Particulate Matter (PM) is a combination of liquid droplets and solid particles. Some are visible with the naked eye e.g. smoke, dust, etc. Others cannot be seen without visual aids such as a microscope. These particles come in all shapes, forms and sizes and can consist out of a plethora of different chemicals. This indicates that they can come from many different sources either direct or indirect. Examples of such sources are car exhaust gases, agriculture, road transport, construction sites, pollutants from industries and power plants… (non-limited list).
http://bioinformatics.biobix.be/aerolis/notebook.html#mo

Research: from biomimicry to biosensors and bio fuell cells

What interests me, in the search to build a bio-pollution-sensor, are 'cyborg'-systems: half organic, half mechanic/bio-technological systems. Actions happening in nature are studied and their principles are translated into a DIY device. When doing so, form (design), functionality and aesthetics are equal important. (e.g.) Think of the inflatable qualities of pollen, the 'making air' qualities of yeast, the 'airbags' of kelp algae, …
It is possible that we will experiment with synthetic biology to create the biosensor. e.g.working with modified E.coli bacteria to force the change of color …

1. Built a photobioreactor to monitor algae growth, The design of the vessel is based upon natural forms (bacteria, pollen) to give the optimal exposure to sun and light (biomimicry).
2. Grow different strains of Cyanobacteria and monitor their development. Determine the parameters for monitoring. Data collection and user interface.
3. Monitor pollutants and heavy metals and their effect on Cyanobacteria. How do the bacteria react? Pigments ⇒ change of color?
4. Run some artistic experiments with the algal biomass; implement the results of the artistic research in experimental devices and artistic installations (objects, biosensors, smart materials, renewable energy).
5. Grow bacteria out of the lab in experimental set ups: cast 3D printed forms in different materials (concrete, wax, epoxy, plaster, …) and cover them with growthmedium (cellulose skins, agar agar, BG11, soil percolate, sugar, …)
6. experiments with filamentous green algae (ex. Spirogyra) and create biomass for weaving fabrics
7. make new materials with algae. Combination with bioplastics, transparent epoxy, other …
8. crush lichen and make them grow on plates (on agar, BG11, soil percolate, …) together with Nostoc or other cyanobacteria
9. experiment with purple bacteria

Algae is an informal term for a large, diverse group of photosynthetic eukaryotic organisms that are not necessarily closely related. Included organisms range from unicellular microalgae genera, such as Chlorella and the diatoms, to multicellular forms, such as the giant kelp. Most are aquatic and autotrophic and lack many of the distinct cell and tissue types, such as stomata, xylem, and phloem, which are found in land plants. The largest and most complex marine algae are called seaweeds, while the most complex freshwater forms are the Charophyta, a division of green algae which includes, for example, Spirogyra and the stoneworts.

No definition of algae is generally accepted. One definition is that algae “have chlorophyll as their primary photosynthetic pigment and lack a sterile covering of cells around their reproductive cells”.
https://en.wikipedia.org/wiki/Algae
algae hydrogen kit

1. Which algae is the best strain for growing biomass that can be used in a fuel cell?
2. Which algae (cyanobacteria) are good to use as a biosensor?

Long Term Culturing
Agar-based media are best for long-term culturing. Bold's basic agar with proteose peptone added does well for many of the green algae, and Allen’s modified blue-green agar supports a wide range of blue-green algae (cyanobacteria). One disadvantage of using agar for long-term cultures is that the cultures must be axenic (bacteria-free). For bacterized unialgal cultures and those that will not grow on agar, Soil–Water Medium or one of its variants is good. Another way to make a good long-term medium is to add a layer of liquid (freshwater or seawater) over agar that contains the appropriate nutrients.
By choosing a good medium for long-term culturing, lowering the temperature 5 to 8°C below that needed for short-term culturing, and decreasing illumination by about half, you greatly reduce the work of maintaining a permanent collection of algae. (Carolina - culturing algae booklet)

Collecting and studying the lichens growing in the rroftopgarden and on the rooftop itself. Trying to understand this symbiont of fungi & algae, to learn from their mutualistic interaction.

Xanthoria parietina is a foliose, or leafy, lichen. It has wide distribution and common names such as common orange lichen. It was chosen as a model organism for genomic sequencing. The outer “skin” of the lichen, the cortex, is composed of closely packed fungal hyphae and serves to protect the thallus from water loss due to evaporation as well as harmful effects of high levels of irradiation. In Xanthoria parietina, the thickness of the thalli is known to vary depending on the habitat in which it grows. Thalli are much thinner in shady locations than in those exposed to full sunshine; this has the effect of protecting the algae that cannot tolerate high light intensities. The lichen pigment parietin gives this species a deep yellow or orange-red color.
The photosynthetic symbionts, or photobionts, associated with X. parietina are from the green algal genus Trebouxia. Species that have been found include Trebouxia arboricola and T. irregularis. Both of these photobionts are known to occur free-living in nature, having been found on bark colonized by X. parietina as well as on bark not colonized by lichens.
Xanthoria parietina is a very pollution-tolerant species. In laboratory experiments, this species can tolerate exposure to air contaminants and bisulphite ions with little or no damaging effect. It is also tolerant of heavy metal contamination. For these reasons, this species has found use as a biomonitor for measuring levels of toxic elements.
1. wikipedia
2. Pollution Monitoring with Lichens. DHS Richardson. Naturalists'Handbooks 19.

Researching in the Open BioLab the symbiotic connections between Fungi and Cyanobacteria/Green Algae. We will focus especially on the NOSTOC strain. Nostoc can be found in soil, on moist rocks, at the bottom of lakes and springs (both fresh- and saltwater), and rarely in marine habitats. It may also grow symbiotically within the tissues of plants, such as the evolutionarily ancient angiosperm Gunnera and the hornworts (a group of bryophytes), providing nitrogen to its host through the action of terminally differentiated cells known as heterocysts. These bacteria contain photosynthetic pigments in their cytoplasm to perform photosynthesis.

Experiment 1: how to keep up water on the surface of the skin, so that the algae can grow?
Design of skin-shells, based upon pollen textures or leaf textures (to keep moist up).
The idea is to print (3D print?) these textures as a flexible, hollow jacket/bag that can be clad around the torso of the beehive. The bag would than be filled with photosynthesising micro-algae that provide energy for the sensors in the beehive:

Processbased artwork. The object is an epoxy cast of a 3D print, based on the design of a bacteria. I wrapped it in microbial skin and I inoculated the skin wih cyanobacteria. All is in a sealed box with soil-percolate at the bottom (in the black sand). I hope that something will grow on the 3D structure. Maybe just stains of cyanobacteria or maybe it will be mold, as this set-up was not sterilized.

Many species of microalgae have high lipid contents that can readily extracted and converted to biodiesel. Similarly, their high content of fermentable sugars makes them suitable for bioethanol production. Microalgae can therefore generate a whole suite of bioenergy products: biodiesel, biogasoline, ethanol, aviation fuel (http://www.enalgae.eu/the-case-for-algal-biotechnology.htm).

R&D of the Photobioreactor (PBR)

Monitoring systems that measure temperature, oxygen, nutrients and light are attached to a Raspberry pi computer circuit  which allows us to collect data on the ideal growing conditions.
more information: Design of a flat-plate photobioreactor for algal growth monitoring
The critical control parameters are:

To design a biological pollution sensor that is doing its job in a correct way, we probably will have to modifythe genetic information of the cyanobacteria cell.
This will be the last research-part of our project.
CRISPR-cas
Professor Marjan Demey, UGent, Metabolic Engineering of Microorganisms
biofunction-aerolisproject.pdf
Professor P.Tamagnini, University of Porto, Bioengineering & Synthetic Microbiology
IGEM Air Pollution Sensor project