The exhibition Fields showed works by artists, agriculturalists, designers, technologists and scientists that are truly transdisciplinary, that blur the boundaries between different disciplines or fields in a very profound way, and that are of a socially transformative character. These works now find continuation through on- and offline projects. This broadcast series entitled 'Kunst Fields' presents work by 6 artists who participated in the show and a 7th work by curator Armin Medosch. This work called Wild Ontologies looks at creatively making taxonomies as a performative practice.

In participatory workshops called Playing Fields artists, curators and the public collaboratively invent terms that characterise a practice. Some of the terms created in discussion with artists in this short-list form the basis of texts, visuals and sounds by artists. Wild Ontologies will make audible the links between the Kunst Fields, the artistic practices that underpin the Fields exhibition. The works by the artists engender social fields, fields of knowledge and other open fields, from the sound of intelligent beehives to President Eisenhower's farewell speech to music made by microbes. The 7 works will be broadcast by Kunstradio in autumn 2014.

Kunstradio – Radiokunst is a weekly radio art program on the cultural channel Österreich 1 of the ORF (Austrian National Public Broadcaster).
Kunstradio was founded by Heidi Grundmann in 1987 and is online since 1995 (http://kunstradio.at). Kunstradio’s broadcasting time is every Sunday at 23:00 for almost an hour and we broadcast pieces which are made by artists, whom we ask to reflect on the medium radio and its changes… We broadcast most of the time pieces which are made specially for Kunstradio, sometimes also live and sometimes also in 5.1 Surround Sound. There is always a signature tune and an introduction which is very flexible in length as this depends on the piece(s), there is no fixed length for the piece, sometimes we also broadcast more than one piece in one Kunstradio show. Sometimes we also do interviews, which we use on air and in longer versions on line.

For your piece Armin and me could imagine it to be around 15 minutes. And in the moment I am planning the broadcast for November.

There is a work by Hartmut Geerken, which he did with recordings from bumble bees, I thought you could be interested in:
http://www.kunstradio.at/SPECIAL/GEERKEN/frameset.html 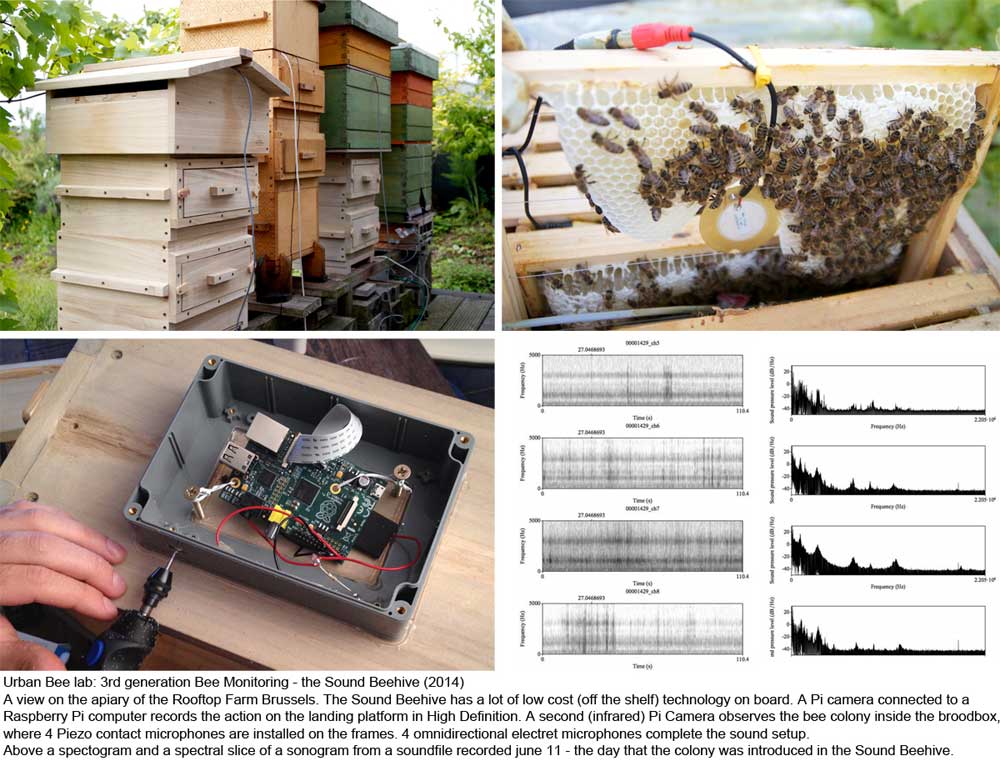 The sound (and video) beehive is a system based upon the continuous monitoring of the colony's buzz, it is a non-intrusive scanning device for controlling the colony's health & development. When such a system is also complemented by non-intrusive video monitoring of the hive, it gives us a full spectrum of possibilities for colony monitoring + environmental surveillance.
As bio indicators, honeybees provide us with a constant stream of information on the environment (urban, countryside) on which they forage (activity, pollen, nectar). Diseases like colony collapse disorder and environmental problems like the use of pesticides could be analysed in a different way by monitoring and analysing the daily activity (audio, video) of several bee colonies over multiple years.
In our test station in Brussels city center, we have 2 beehives equipped with off the shelf-technology for monitoring bee activity at the landing platform (2 x video, outside and inside) and for monitoring the health and development of the colony by sound recordings of its activity (8 x audio, inside). The test station also hosts 4 non tech. equipped beehives which are usefull to make observations at the flighthole and to compare these findings with the results of the digitally monitored hives. 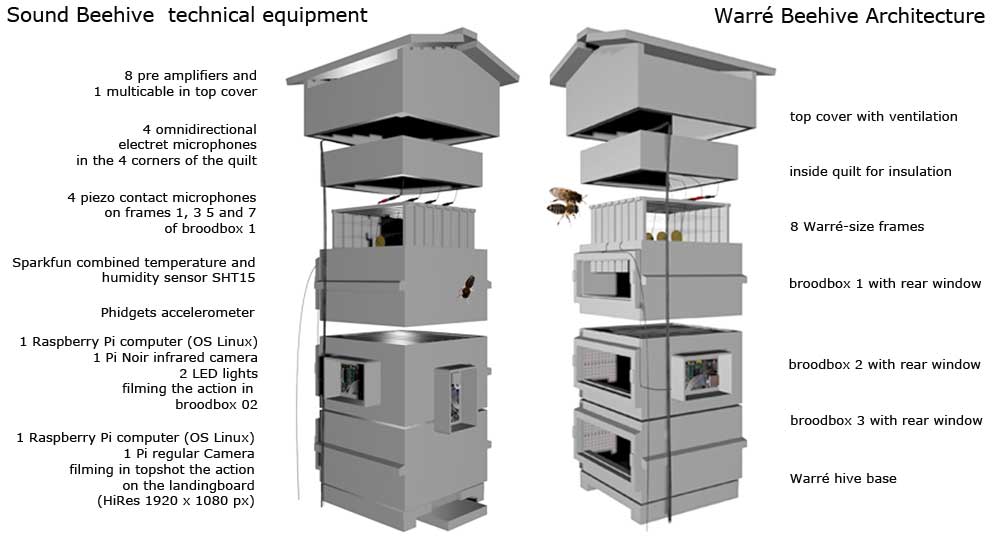 Audio annotation:
Beginning of august I started to make some audiorecordings with a separate shotgun microphone, additional to the 8 microphones setup in the beehive from the start of the experiment (june 10, 2014).
Compared to the audiorecordings from inside the hive where the focus is merely on the behaviour of the colony as a whole (the super organism) we here distinct clearly the individual movements of the foragers returning to or departing from the landing platform.
Video annotation:
Upper left (movie dd. 2014/06/10) is the day we introduced the small colony -a young queen + some 1000 workerbees- in the beehive. There is quite some action, as all the bees are exploring the immediate surroundings of their new home. The nest was completely empty at the start, the bees will build asap some comb for the queen to put her eggs. (count 5 days)
Lower left (movie dd. 2014/06/20): There is still action on the platform, as all available worker bees need to find food (nectar but mostly pollen) to feed the larves. It takes 21 days for a bee to grow from an egg to an imago (fullgrown bee) and hatch the cell.
Upper right (movie dd. 2014/07/10): 20 days after the former video there is a decrease in action, as a lot of the initial worker bees came to their life end and the new worker bees are not yet ready to fly out. After her birth, a young bee spends first 3 weeks inside the hive to fulfill a series of tasks before she becomes a forager and flies out.
Lower right (movie dd. 2014/07/30): from now onwards the number of bees will increase. The colony reached a continuous flow of old bees dying and young bees getting born. Though, the end of the summer (for the bees) is near and the important nectoar flows are over. All available food has now to come from wild flowers and the last pollen-boost can be expected from ivy (Hedera helix) blossoming end of september/beginning of october.

The video-monitoring files are uploaded in Pandora (the open source video database) and are open for annotations from collaborators.
The above 4 movies are plucked out of the continuous daily videostream.
Every 10 days since the introduction of the colony in the beehive, we show the action of the foraging bees at 01:00pm.