The exhibition BEE DEVICES and other curious observations is the starting point for the presentation on the research and artistic work of AnneMarie Maes and the Brussels Urban Bee Lab. The work of AnneMarie Maes, media artist and beekeeper, is already since more than six years based on a rigorous research into bees. AnneMarie Maes set up the Brussels Urban Bee Lab in 2009 and this artistic laboratory installed several instrumented beehives on garden roofs in the centre of Brussels. The artists and technicians of Brussels Urban Bee Lab designed sophisticated equipment to monitor and measure the bee colonies, process the data and disseminate these via streaming.
This research so far instigated a series of installations, objects, graphic works, sound works and workshops that were shown in galleries, festivals and public spaces. It induced an intense interaction with scientists and technologists, partly to build and install the measuring equipment but also to investigate the reasons for the urgent problem of bee colonies starting to die out in all industrialised countries. 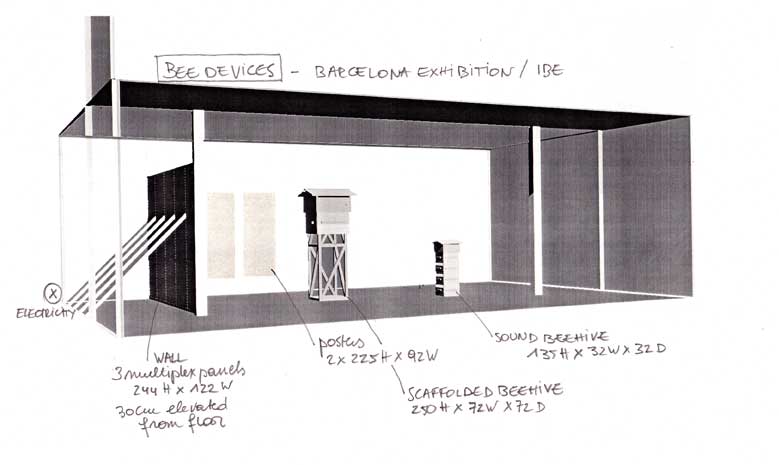 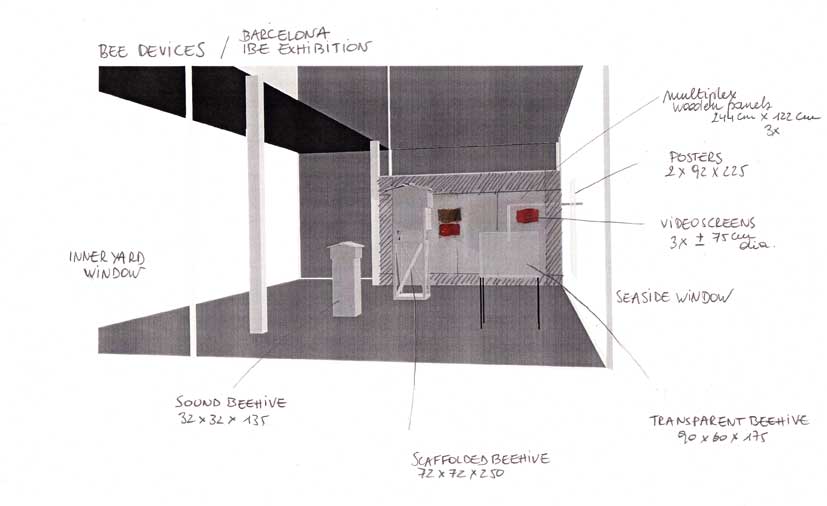 description of the elements of the installation: 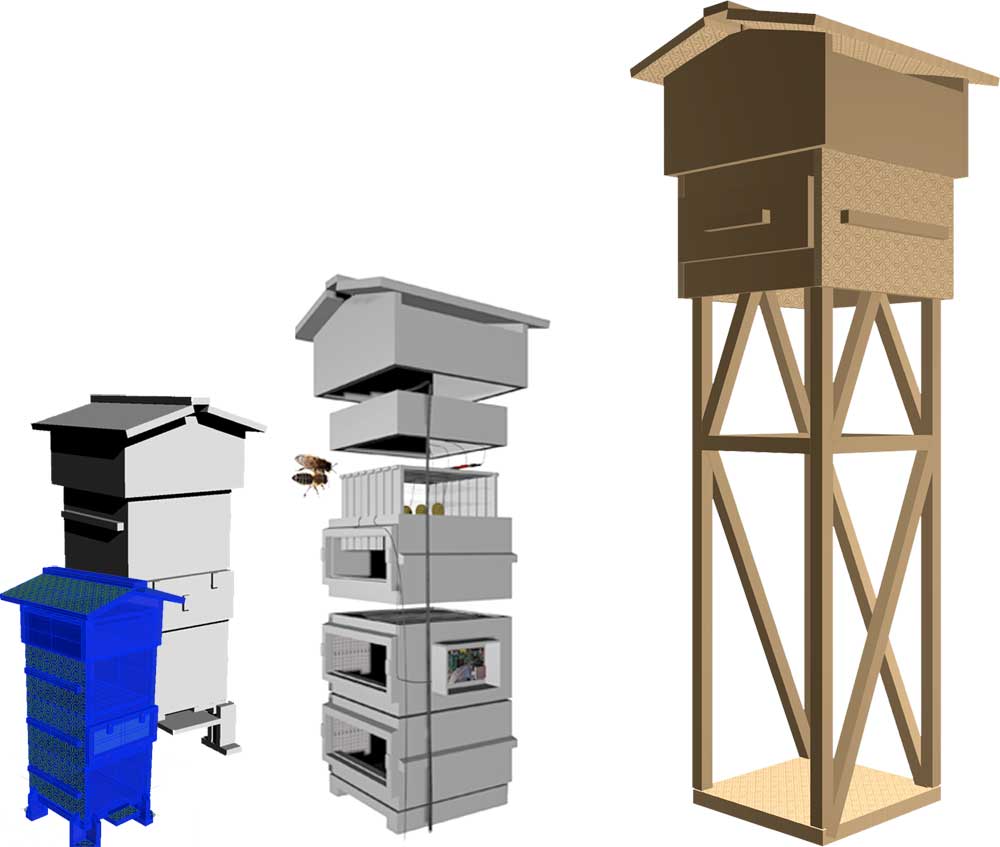 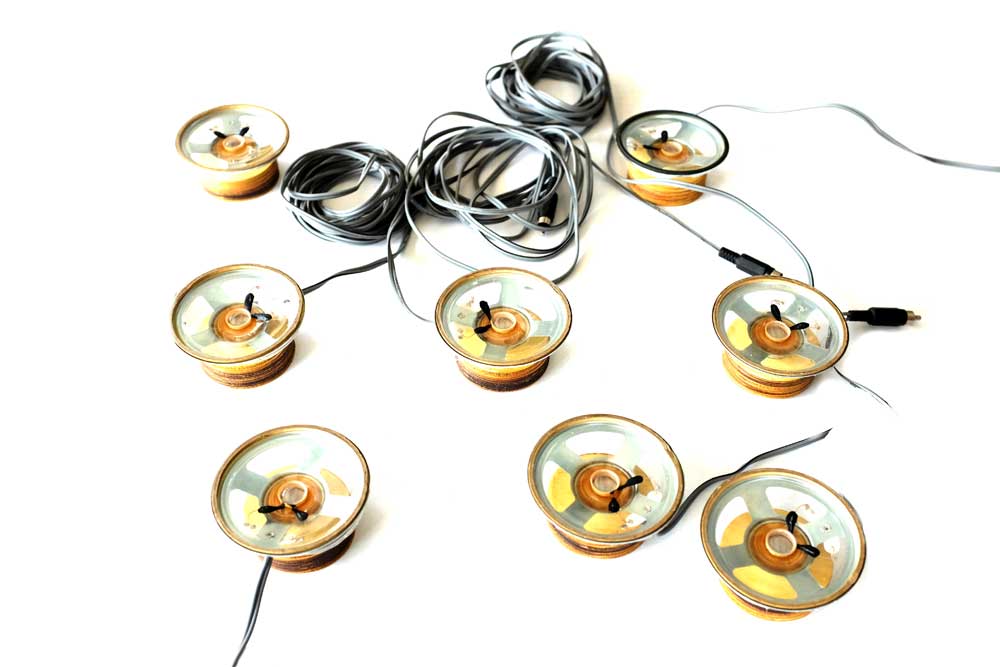 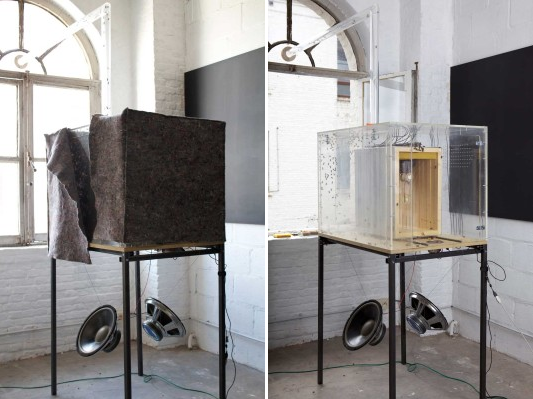 The installation at IBE will be centered around the multimedia installation the Scaffolded Sound Beehive. This immersive sculpture is a reproduction of a Warré beehive on human scale. Installed in the roof of the hive is an eight-channel spatialised sound installation of which the sounds were recorded with eight microphones in a real beehive. Visitors can stand or sit inside the beehive and will have their heads thus literally in a bees’ nest. The installation Scaffolded Sound Beehive also incorporates three videos. One shows the behaviour in the hive of a bee colony as recorded during 365 days with an infrared camera, the other is an artistic visualisation of the sound data collected in the beehive, a third video is an artistic interpretation of the life in the hive.
Next to the Scaffolded Sound Beehive the real-size Warré SoundBeehive will be shown. This is the instrumented observation beehive which served to make all audio and video recordings inside the beehive.
A third bee-device is the Transparent Beehive. This sculpture housed a bee colony during an entire bee-season, in the studio of the artist. The bees were connected to the outside world via a plexi tube.

The Brussels Urban Bee Lab is working since 2009 on a series of observation beehives that are equipped with eco-technology. These art/science sculptures will eventually lead to the development of the Intelligent Beehive, an energetically autonomous and biologically degradable instrument that offers a nesting place to bee swarms as well as the observation of a bee colony at a distance. The data produced by the bees give valuable information on both the state of the environment as the development and well being of the colony. This long-term art/ science project is developed in collaboration with scientists, beekeepers, technicians and artists.

The Intelligent Beehive collects the data measured by using biosensors (the sound of the bees). The data are collected from the audio files and the visualisation of this information helps to explain the processes that occur in the behaviour of the bee colony. In the visualisation of the data several skills are used such as data-mining and complex systems theories but also interaction and graphic design.
Artistic visualisation of data is a discipline that is increasingly used within media art.

The Brussels Urban Bee Lab uses these art/science projects to inform the public about the fact that honeybees are threatened with extinction in the western world, amongst others through the misuse of pesticides. The current state of our environment (the foraging fields of the bees) is already very worrying. Monocultures take over from biodiversity; pollution and small particles threaten the green zones in the cities. Bees are a recognized bio-indicator and we want to raise awareness by pointing at the growing negative impact of certain life styles and some methods of industrial production.

embedded version of the movie

A laboratory on the open fields
A research vehicle, a living sculpture
A storytelling machine
producing a narrative that slowly reveals itself
Through sensors, processors, displays
I connect myself to this organic supermachine
I watch the steps of the bees, deconstruct their behaviour I monitor their sounds and amplify them
My algorithms recognise patterns, measure their dances. I translate their narrative of absurd repetition
I track what they do at night
They are architects of an ever expanding city
They are threatened with extinction.
They are a divine monarchy, a socialist republic
Marxist communism
Collectivism not individualism.


Inside the beehives, monitoring with infra-red cameras

The lightboxes are 26cm by 26cm. I would like to present them in a vertical row, on a wooden shield that is made around the metal beam at the entrance of the room (to the left).

Wood (multiplex panels) for the back wall, can be 12mm or 18mm thick. Can be any finish, what the carpenter has in his stock, the cheaper the better :) - doesn't need to be birch - but a light color, with not too much design (as in pine) would be nice.
We also need wood to cover the metal column (till a certain height, lets say same height as the wall).

LCD-screens: we need 3 LCD-screens with folowing features:
- a USB stick connection
- a pixel resolution of 1920 x 1080 (= full HD)
- a 'repeat'-function (the videos need to be played in loop, continuously)
- the screens should be between 70cm and 80cm (mostly this is measured in diagonal way) - if it is 81 or 69cm it is also OK.
- the screens should have a possibility to hang tham on the wall. Therefore we probably need to buy a supplementary wall-mount kit (34€ in the Mediamart, screens should be between 250 and 350€)
- I checked at the Mediamart and I found a Samsung, a Philips and a LG, all corresponding to these requirements
- we will need a lot of electricity cables - normally the electrician of CSIC should be able to provide power to the place where we need it. 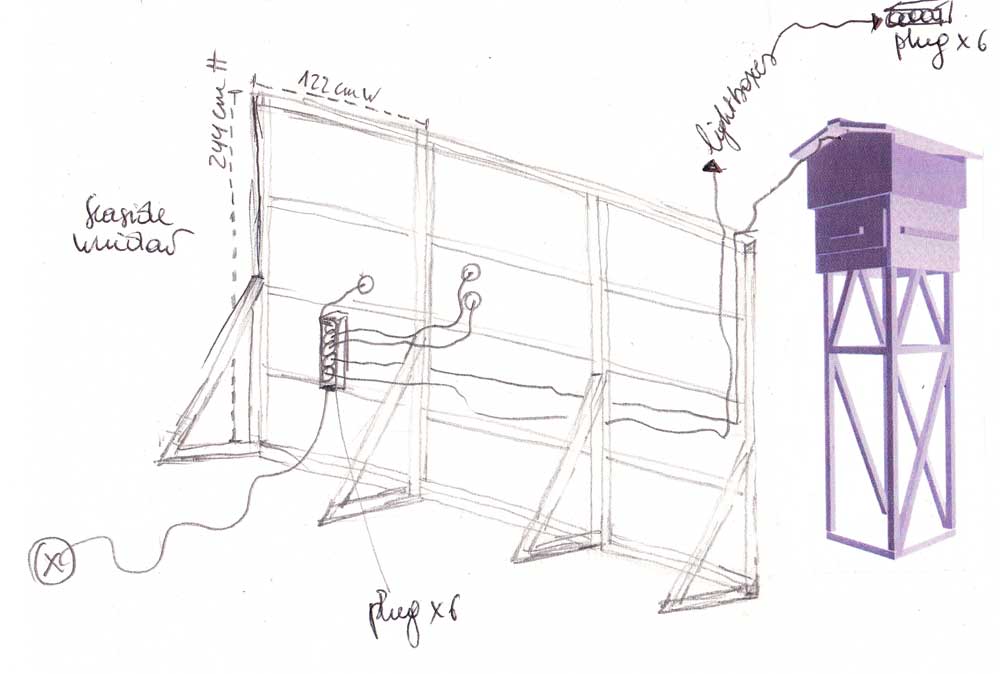