bringing in the bees 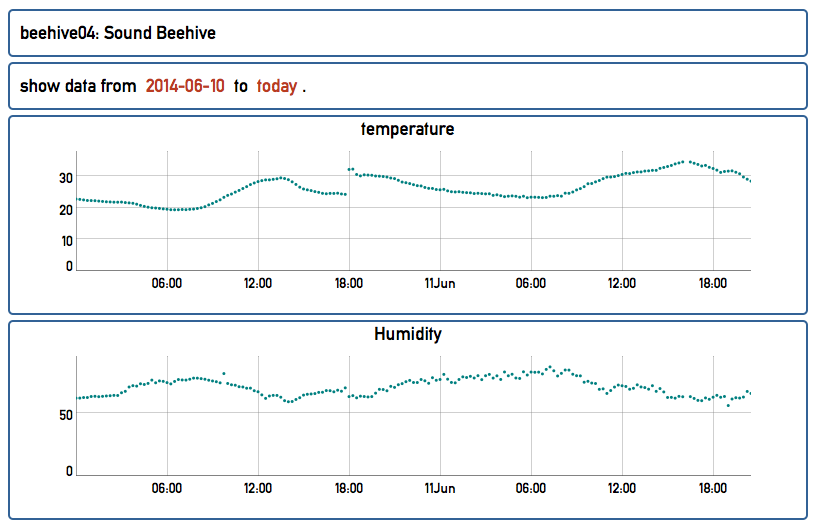 Wednesday, june 11: bees inspecting their new environment.
These images are filmed with the PiNoir camera from Raspberry Pi, inside the Warré beehive. The hive is lit by 2 infrared leds, synchronised with the recording timings. The bees are fresh in the hive, they are discovering and inspecting their new home. The image is not completely sharp, due to poor light circumstances.
http://pandora.okno.be/PE/editor/00:03:34,00:00:04.040,00:03:34 ⇒ filmed inside the beehive
http://pandora.okno.be/UA/editor/00:01:50.680,00:00:00,00:02:59 ⇒ filmed outside the beehive 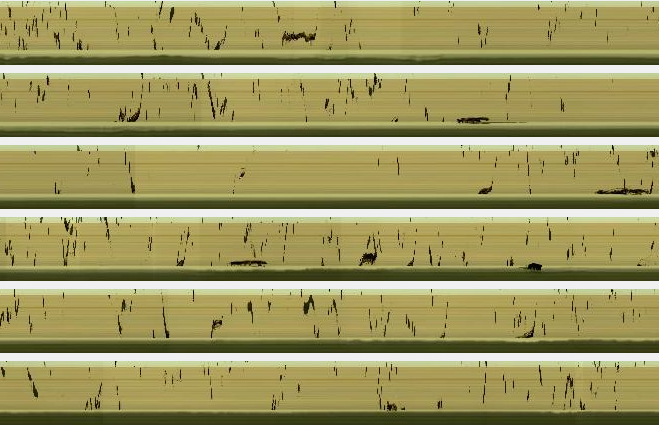 29/06/2014. First inspection of the sound beehive, after 2 weeks of introduction of the colony. The colony does not develop as fast as I as hoping. Maybe something is wrong. I can only do another close inspection on monday 7/7. In the meantime I feed the workers with a 1/1 sugar solution, to support them with finding food.

14/07/2014 : the second inspection of the sound beehive colony. After Bologna, Barcelona and Nantes I was a bit afraid to open the hive, as I suspected to find an underdeveloped colony. But no way! Altough that there's not yet that much activity at the flighthole, the colony inside the hive is super well developed. The 6 middle frames are completely build out, and the 2 outer frames are nearly completed. The bees build wax around all piezo's. Piezo 8 (most right from standing behind the hive) is completely covered, as well as piezo's 6 and 7. Piezo 5 (utmost left) is half covered. I think that, in a week or 3, the bees will move downwards. Just enough time to improve our PiNoir camera setup.
But alltogether you can clearly see that a honeybee colony in a Warré beehive develops at its own pace, which is slower than in a 'commercial' beehive as Dadant Blatt or Langstroth or Kempisch … It is a good observation tool to work towards a complete natural beehive - we'll check out what the season will bring further …