Description of the photo documentation (from left to right):

2-7 February 2016 ⇒
A larger piece of fabric was woven out of multiple strings. The string were a mix of white Psyllium, and Psyllium mixed with pollen (yellow) + agar agar. The pollen-mix is a bit more difficult to handle, thicker, more rigid. I've put the fabric between 2 plexiglass plates which I used as a press to flatten the piece. After a few days mould started growing, especially in the zone where the Psyllium was mixed with the pollen. The mould later spread out also on the non-pollen zones. I took some samples to study under the microscope. Some of them keep on growing in a very fast way (the one in a bigger box looks very much like a mouse).
The experiment with glycerol 85% is more satisfying. The fabric stays supple. After 36 hours it is possible to handle the material: cut with a scissor and drape it over a sphere. I tried to weave threads down the sphere, but therefore the material was still too wet and fragile. The top part was OK, but half of the the hanging parts broke down.

6-12 February 2016 ⇒
I made several new combinations to test on strength, flexibility and drying time. I bought nice containers at Modulor, perfect for executing the tests. In the square containers, I made equal mixes of Psyllium and water, with a different quantity of glycerol 85% (1 spoon, 1.1/2 spoon, 2 spoons). I filled a bigger container with pollen and a relative higher quantity of glycerol to keep also this pollen-fabric flexible.
The square containers were filled till the top (1.1/2cm), the large pollen-container was filled with a layer of ± 8mm thick.
I put each of the containers for 2 hours in a warm-air oven heated to 50°C to kickstart the drying process. The paste became more solid after this, and I hope it will be a good remedy against mould invasions. I will leave the rest of the drying process in a natural way.
I've put the recipients another 2 times for 2 hours (every 2 days) in the 50°C heated oven (only warm air). After 6 days I took the pieces of celllulose out of the containers. They are solid rubber and very flexible. There is a slight difference between the piece with more glycerin and the one with less glycerin. The one with less is more elastic but not so solid.
I think I finally found the right combination of quantities/recipients/drying time. The pieces look really fine when I stick them with their jelly/rubberish side on a window, backlit by sunlight. I will try out some patch works with more pieces in different thickness of the material, and maybe some differently coloured with natural plant dyes.
Another small experiment is to work with half spheres. I made a sphere out of plaster and I put strips of cellulose (1 day old) in a woven pattern on top. The purpose is to check if the cellulose after drying takes on the spherical form, without the support of the plaster cast.

10 march 2016:
20 hexagons and 12 pentagons grown from Psyllium, water, glycerine and pollen.
Here they are presented in 3 layers photographed on top of each other.
Next step is sew them together into the form of a GMO-free football! 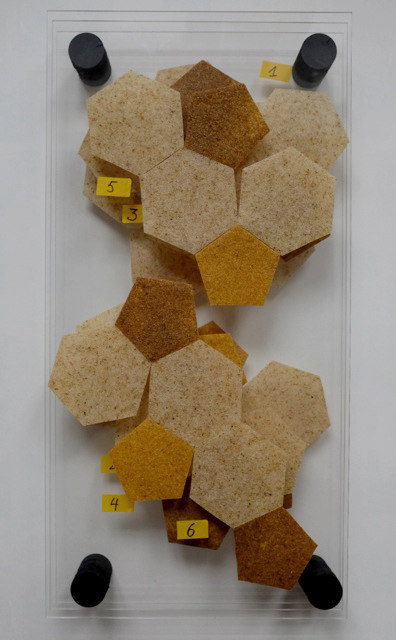